Visual learner?Watch me make this vegan brownies from start to finish!”

Only one more week before cookbook recipe testing is done! Yep all 80+ recipes! Then I’m off to the beach to write all of the nostalgic stories that go along with each one. I’m so excited about that part. Lord knows I need a semi-vacay, and I always write better when I have an inspiring view.

It’s a been a long process of testing & tweaking EVERY recipe, but I’m so pumped to present this cookbook to you guys. It’s a keeper!! Like, for real, these recipes are the bomb! It’s like that old Lauren Hill Miseducation album where all the songs were lit! Memba that? *toot toot goes my horn*

Anyway, between cookbook recipe testing and fixing up my grandmother’s home, there’s been lots of family cookouts in the mix. This has left me looking for new items to take and try out. Lately, I’ve been having a blast testing out vegan recipes.

For Memorial Day, I made my vegan family members a heavenly fruit salad! For the 4th I’m making these super fudgy vegan brownies and pairing it with homemade vegan ice cream.

These vegan brownies weren’t much of a challenge at all. I got them right at my first attempt thanks to tip my vegan sister gave me. Generally for the eggs in vegan recipes, I replace them with applesauce but my sister hipped to making flax “eggs”.

I put ground flax seed in my smoothies, but I had no idea it could be used as an egg replacement. Soaking ground flaxseed in water results in a thick, gelatinous mixture that is perfect for binding ingredients.

They are so fudgy, chewy, and downright delicious!

If you are a fan of super, fudgy brownies, then these will win you over! They are practically begging for a cold glass of milk (almond milk) and vanilla ice cream. We are not vegan (or even close to) in my house but we still love lots of vegan dishes. When you can make a vegan recipe and have it taste just like it’s “normal” replica, that’s a real win in my book.

I hope you guys enjoy these dark and fudgy vegan brownies just as much as we did!! 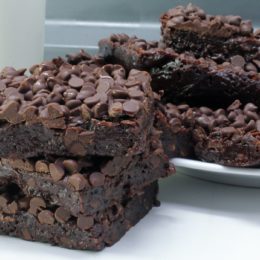 Get the Recipe: Fudgy Vegan Brownies