It’s funny how I hated pumpkin-flavored stuff as a kid but now I’m totally obsessed with all things pumpkin. I knew it was only a matter of time before I tried pumpkin pie cheesecake. I’ve actually made a pumpkin pie cheesecake years ago on this blog but figured it was definitely time to tweak and update that recipe. 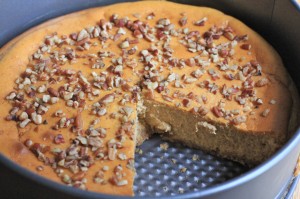 I know I’m going to get asked “how can I make this low-fat?” Honey….you can’t! Some things were just created to be full fat and cheesecake is one of them. There is no getting around it unless you want to compromise the flavor and texture. Do not use low-fat ingredients for this. Just make the cheesecake and share it with friends, eat a tiny slice and give the rest away or eat the whole thing. I won’t tell anyone. Your glutonish secrets are always safe with me. Just make it. You won’t be sorry.

Watch me make this Easy Pumpkin Pie Cheesecake from start to finish!

~TIPS~
Make sure all ingredients are room temperature.
Do not overmix! It's ok to beat the sugar and cream cheese like crazy though.
Don't skip the water bath!
Tried this recipe?Mention @divascancook or tag #divascancook!
14 Comments
share this tweet this pin this email this
The BEST S’mores Popcorn Balls
Sparkling Thanksgiving Punch Recipe

Happy #nationalwafflesday !! Who else grew up on t

If you believe in the power of prayer or sending g