Watch me make this thick and creamy apple butter from start to finish!

It’s apple butter time!!! Like seriously, I HAVE to make at least one batch of apple butter every year. Usually around this time is when the craving hits. 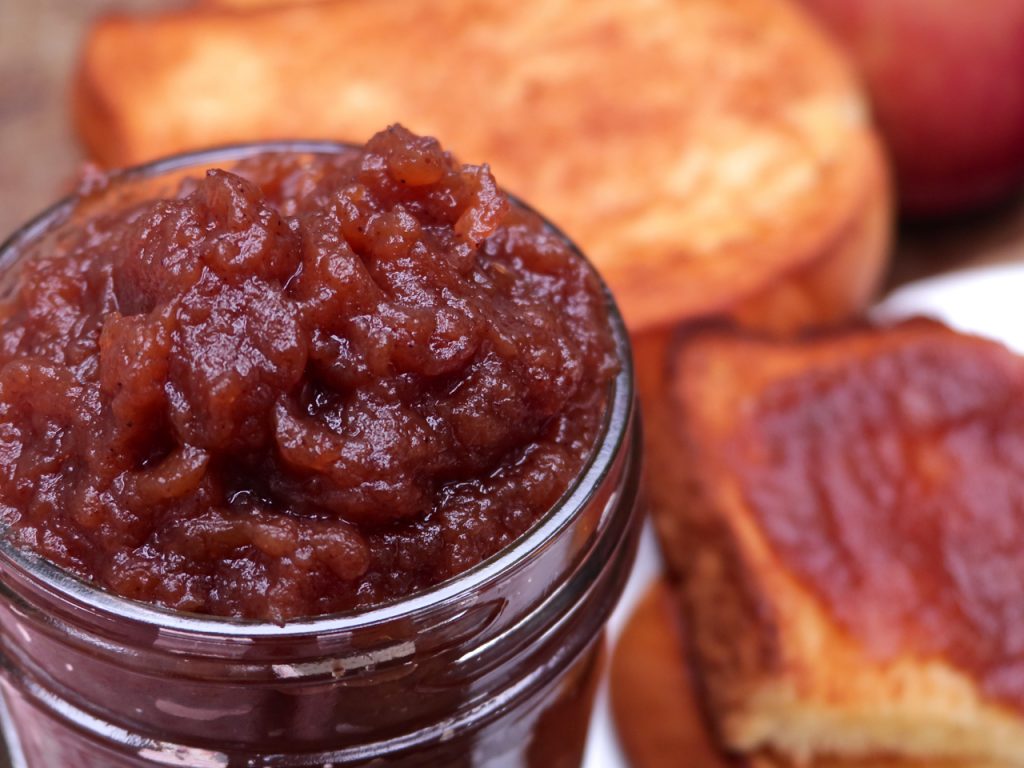 Prepare to have your house smelling like an apple cinnamon heaven because goodness, homemade apple butter smells so absolutely divine!

Have you ever had or made apple butter? If not you’re probably wondering a few things like:

Those are usually the questions I get. And here are some answers that may help.

What the heck is apple butter?  Well, it doesn’t have butter in it. I know, crazy right?  Apple butter is basically slow-cooked applesauce that has been cooked down so that when it’s done cooking you’re left with this thick, smooth and highly concentrated spread known as apple butter. It’s a beautiful thing, people!

How do you make apple butter? Oh, you just peel, core and dice some apples. Throw them in the crockpot to cook, mash it up until it’s applesauce, add some sugar and spices and then let it slowly cook for hours until it’s thick and the liquid is gone.  Well..at least that’s one way of doing it.

How are you suppose to eat applesauce? The same way you eat any other jam, jelly or fruit spread. I LOVE it on buttered toast but it’s also great on rolls, biscuits, in ice cream, or mixed with real butter. 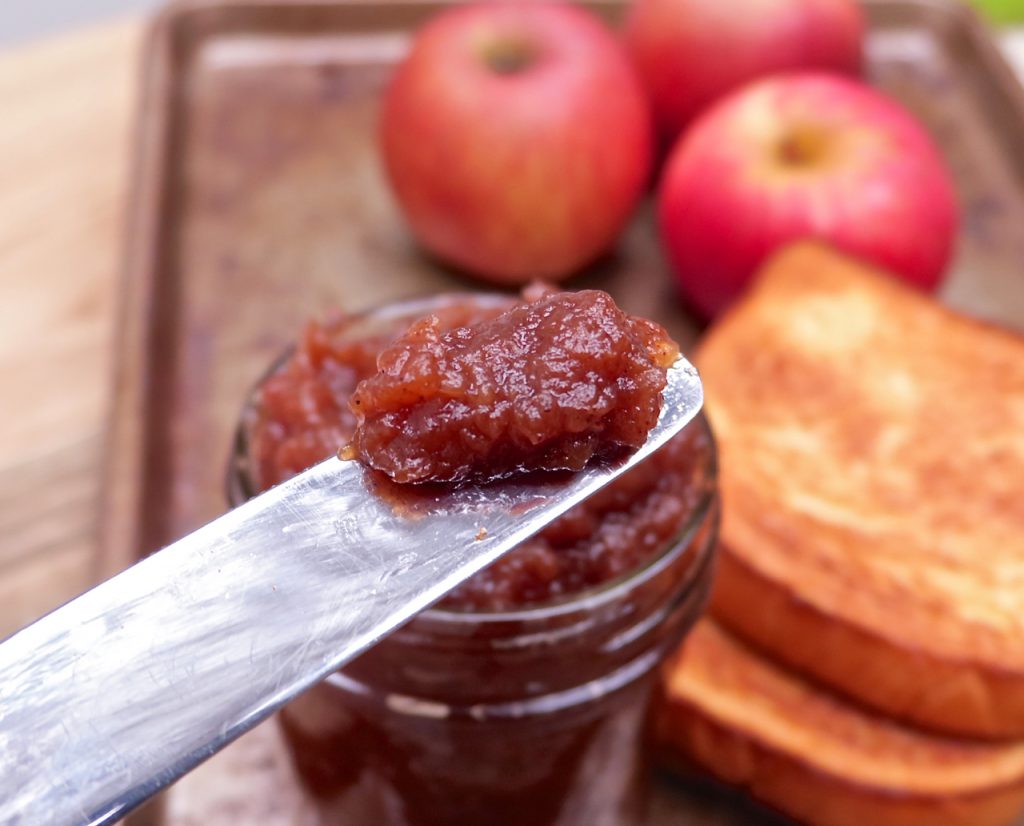 Another reason why I adore this recipe is that it’s for a small 1 jar batch. As much as I love to make large batches of fresh apple butter and give them away, sometimes I just wanna get my fix. Usually, one jar is enough for my family before we get tired of it. 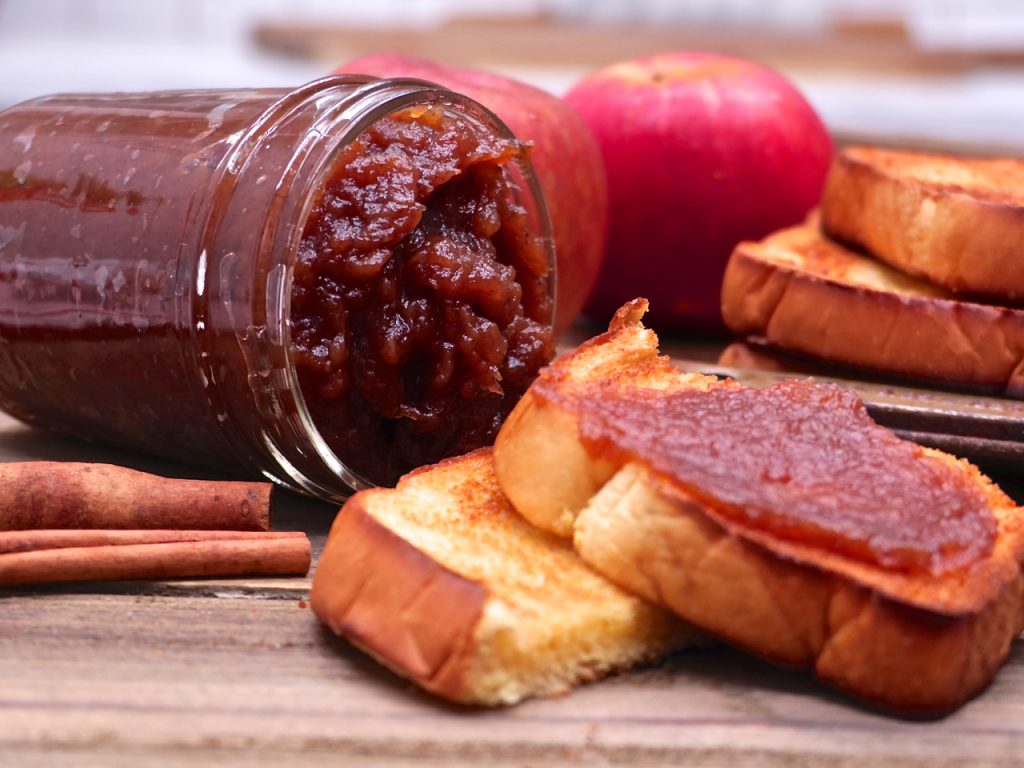 This recipe makes a little over a cup when it’s all the way cooked down. Can you believe that? 4 pounds of apple reduced down to 1 cup! You only need about a tablespoon per serving so it makes plenty for a family of four. 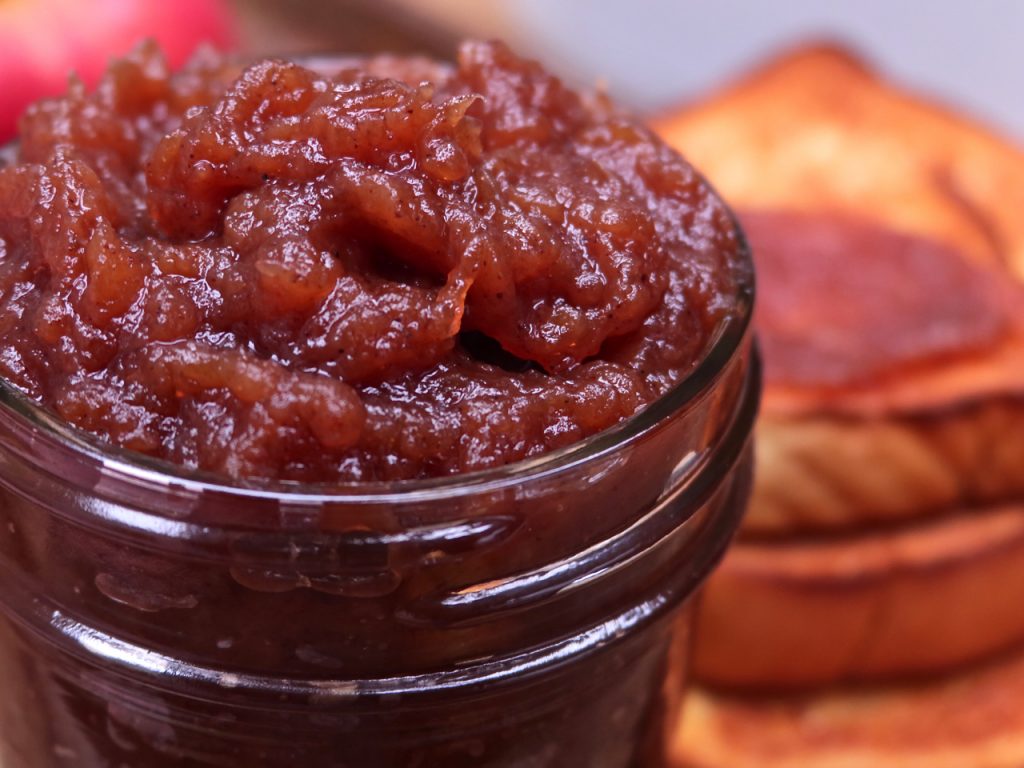 How to know when apple butter is done? I use two ways to check to make sure my apple butter is done. Now granted I prefer my apple butter to be as close to old-fashioned as possible which means I like it thick, thick and thick! If it’s the consistency of applesauce, no ma’am!  To check for doneness: Spoon out some of the apple butter, turn the spoon upside down. The apple butter should cling to the spoon without falling off right away. If it does fall off, continue cooking to remove more of the liquid. Alternatively, you can spoon a mound of apple butter on a plate and watch to see if liquid forms around it.

Sounds easy enough right? It is! 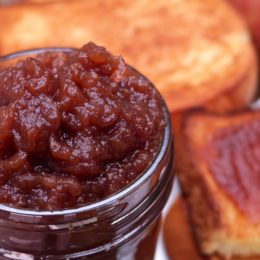 Get the Recipe: Apple Butter

Cooking times: Cooking times will vary based on the apple used. Some apple varieties are juicer or firmer than others. Cooking times will also vary based on the crock pot size.
To check for doneness: Spoon out some of the apple butter, turn the spoon upside down. The apple butter should cling to the spoon without falling off right away. If it does fall off, continue cooking to remove more of the liquid. Alternatively, you can spoon a mound of apple butter on a plate and watch to see if liquid forms around it.
Cuisine: American
Course: spread
Author: Divas Can Cook
Serving: 0g, Calories: 0kcal, Carbohydrates: 0g, Protein: 0g, Fat: 0g, Saturated Fat: 0g, Polyunsaturated Fat: 0g, Monounsaturated Fat: 0g, Trans Fat: 0g, Cholesterol: 0mg, Sodium: 0mg, Potassium: 0mg, Fiber: 0g, Sugar: 0g, Vitamin A: 0IU, Vitamin C: 0mg, Calcium: 0mg, Iron: 0mg
Tried this recipe?Mention @divascancook on Instagram or tag #divascancook.
Frostings, Spreads, etc.