Video recipe: Watch me make this vegan banana bread from start to finish!

Did I tell you guys I started my Fall garden? Sometimes I completely forget what I’ve already shared. If I have, just act like you’re reading it for the time okay. Hey, guess what, I started a Fall garden!! Yep, my non-green thumb self, and I’m pumped because my collard’s greens have started to grow so big! I started them from seeds (something I usually don’t do) and placed them in empty eggshells halves. When it was time to plant them I just gently broke the shells, placed the seedling into the plant bed, and sprinkled the crushed shells around them. I wonder if this is what’s making them grow so quickly? I’ve never had this type of quick success with plants!

Either way, I’m so excited because this will be the start of my Grandma Barb Memorial Garden. I showed you guys her amazing garden in my collard green video and I think she has left me with her love of gardening because I’ve been so intrigued by it lately. This Fall I’m only planting collards, cabbage, and potatoes but it’s on and popping once  Spring gets here.  I can’t wait to show you guys! I’ve been working like crazy building raised plant beds, plotting out my garden, and preparing the space.

I took a much-needed break from the dirt and headed into the kitchen to make some banana bread! Now, I hadn’t planned on making this vegan but I realized at the last minute that I was out of eggs (my chicken is on strike for some reason) and I only had 3 tablespoons of butter! Huh??? That NEVER happens around here!  Ha! That goes to show you just how consumed I’ve been with this memorial garden project!

Anyway, after making this vegan banana bread I knew I had to share it with you guys!  I’ve already made it twice since. It’s so doggone easy, delicious, and gorgeous!! It can be added to the list of vegan desserts on this site that “don’t taste vegan!” Like these vegan chewy chocolate chip cookies.

This vegan banana bread seriously tastes like regular banana bread. It’s so moist and fluffy! Full of fresh banana flavor with hints of cinnamon and vanilla. Not to mention it has such beautiful moist cracks and crevices which I love. It’s the perfect gift-giving or shipping bread because, like all banana bread, the flavor is even better the next day!

For testing purposing, after I made the first batch of bread (which is perfect and the one I’m sharing today) I decided to try another batch. This time I decreased this almond milk and added flax eggs (ground flaxseed + water). While the texture of the finished bread was fine, the taste was lil to “nutty and bran tasting”. There is no need to add any egg replacements. Since bananas and oil are good egg substitutes, banana bread is the perfect recipe to “Veganize” IMO.

I love that this vegan banana bread has such simple ingredients. If you don’t normally keep vegan ingredients in your home you’ll only need to purchase some vegan butter and almond milk. Both can be found in most grocery stores. 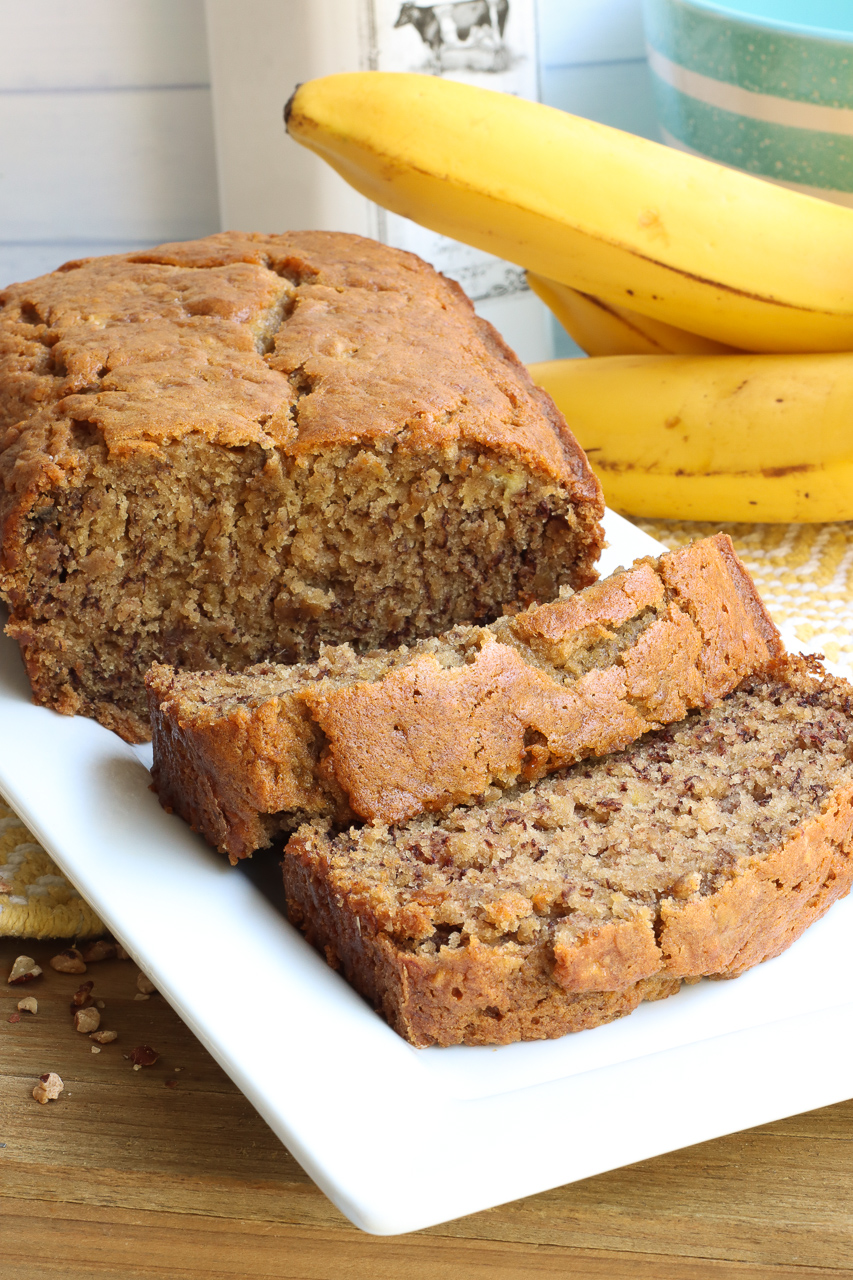 Wait this has white and brown sugar? Is this vegan?

Great question! I get this question often when I post vegan recipes that use sugar. Some vegans are not opposed to white sugar as long as the brand uses vegan-friendly practices like Imperial Sugar. White sugar is avoided by some vegans because the process of lightening it often uses bone char.

There isn’t any bone char in the sugar, but since it’s a part of the process, it makes it non-vegan. Cane sugar is the BEST replacement (as far as taste) if you prefer not to use regular white sugar.  However, surprisingly many cane sugar brands are NOT certified vegan so be sure to check if that’s super important to you.

All of the vegans in my family are ok with regular sugar, so that is what I often use.  If I’m making vegan recipes for other people I always check to see how strict they are when it comes to sugar and follow their guidelines. I’m always learning something new in the vegan world!

Just today I was told that some vegans don’t get tattoos because black tattoo ink is made with charred animal bones. Whodathunkit! Whatever way you lean when it comes to regular or cane sugar, this banana bread recipe will taste the same with whichever one you choose! Now I can’t promise that if you go replacing the sugar with monk fruit and thing like that.

How to make Vegan Banana Bread…in a nutshell.

This banana bread is so incredible as is but if you want to kick it up a notch with some add-ins, try these! 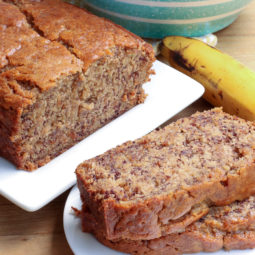 Looking for More Vegan Dessert Recipes? Check these out!