“Loaded with sweet potatoes and reminiscent of the flavor of sweet potato pie!  These sweet potato brownies are chewy, dense and so delicious! Topped with a marshmallow glaze and pecans! The best autumn brownie!”

Watch me make these sweet potato brownies from start to finish!

I just came back from a family vacation in the picturesque Tennessee mountains and oh man,  it was pure love. I adore ALL of my family but whenever I spend time with my core family (decedents of Grandma Barb) I’m always left feeling energized, filled with so much love, and craving more. Yep, these people are my tribe! (You guys are too!)

We originally planned on saving this trip for Thanksgiving but decided to do it sooner since we were all in need of some family bonding time after the passing of our gem, Grandma Barb.

For four days all of Grandma Barb’s descendants ( my aunts, uncles, cousins, siblings, nephews, & nieces) stayed in a gorgeous cabin and spent our days playing board games, sifting through family photos, having deep family discussions, bonfires, laughing at old family videos and COOKING!! My goodness SO. MUCH. COOKING.

My uncle B was in his element and prepared a lavish homemade spread for breakfast, lunch, and dinner! This family time was therapy in its purest form and my cheeks were literally sore from laughing so much. I even got a chance to give my family a sneak peek of the upcoming cookbook which is so fitting since they are all throughout it!

On check-out day, we cleaned up, packed up, and then sat around talking and joking about how it would be so fun to have our own family-gated neighborhood so we could all be together. Grandma Barb created this rare, tight bond between us and I know she continues to be so proud. I felt her presence so strongly the entire time.

There are so many recipes from my family vacation that I want to share with you guys! My uncle B’s chicken tenders and cinnamon rolls that he made for the kids that blew everybody’s mind. Oh and my cousins’ epic breakfast potatoes and my aunt’s vegan, gluten-free vanilla chocolate chip cake that my husband can’t stop talking about!

Sweet Potato Brownies for the win!!

But today I’m sharing these sweet potato brownies! They just remind me of all things Fall and with Thanksgiving right around the corner, let’s do it!! These were supposed to be my dessert contribution on the cabin trip but we ended up cutting a ton from the menu because there were just so many leftovers.

I decided to make these sweet potato brownies for my house and I literally had to hide them from Ethan. Mind you, this is the child who claims to hate sweet potatoes! I don’t know how many times I said “Ethan stay out of those brownies! If you’re hungry eat something healthy!” when I’d hear him slowly opening the Tupperware. His response “But they are just so good!”. I understand his dilemma all too well!

What are sweet potato brownies?

I guess technically these brownies should be called sweet potato blondies because they DO NOT consist of any cocoa powder or chocolate chips, but I like to call them brownies. Just like these lemon brownies, the texture is just like a dense, chewy slightly cakey brownie! They  are bursting with real sweet potato flavor and seriously taste like delicious candied yams or sweet potato pie in brownie form.  There will be no mistaking these for pumpkin, let me tell ya! The marshmallow glaze and pecan chips are the perfect toppings and compliments the flavor so well.

Is this a healthy brownie recipe?

Ummm…well…these brownies contain a whopping 1 1/4 cup of sweet potatoes! Yep, that’s a lot of calcium, vitamin C, vitamin A, fiber, protein & potassium!! So in my mind, this counts as a healthy brownie full of nutrition and good calories! The reality though is, no! They are not considered healthy. A girl can dream!

However, this IS a lot of healthy sweet potatoes for such a small batter! During my recipe development, I kept increasing the amount until it had a negative effect on the taste and texture. 1 1/4 cup was the winning ratio! It gave the brownies such a beautiful natural orange color, delicious sweet potato flavor, and a creamy yet dense, brownie-like texture.

How to prepare the sweet potatoes:

This recipe requires mashed sweet potatoes. This is super easy to do!

How To Make Sweet Potato Brownies…In a Nutshell

1. Simmer diced sweet potatoes until tender. Drain and mash/mix until creamy. Set aside.

3. Stir in flour and mashed sweet potatoes. Mix until combined.

4. Pour brownie batter into an 8×8 glass casserole dish that has been lined with parchment paper.

5. Bake for 40-45 minutes in a 350 F. preheated oven or until a toothpick inserted into the center comes out clean.

6. Let brownies cool in the pan.

7. Combine all of the marshmallow glaze ingredients until silky and smooth.

8. Remove cooled brownies from the pan. When brownies have completely cooled, spread on the glaze and sprinkle with pecan chips. Allow the glaze to firm up and then cut into squares.

9. Store in an airtight container on the counter in the fridge.

How do I make a bigger batch? You can make a 9×13 batch by simply doubling the recipe.

How should these be stored? The sweet potato brownies can be stored on the countertop in an air-tight container or in the refrigerator.

Want to make these sweet potato brownies recipes vegan? Easy peasy! Replace the butter with a vegan brand like Earth Balance or coconut oil base butter, like Miyoko’s. Replace the refined sugar with pure cane sugar. For the marshmallow topping, melt vegan marshmallows, and vegan butter.  Stir in vegan powdered sugar and enough vegan milk until it is silky. ( Note: This glaze will remain tacky and will not firm up as well as the non-vegan recipe. Or at least it didn’t with the vegan brands I used.)

These gorgeous brownies look so nice plated on a holiday table! If you’re in the mood for more festive brownies check out my favs below this recipe! 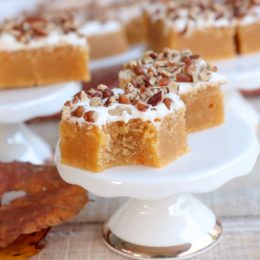 To Make the Mashed Sweet Potatoes: Peel 2 large sweet potatoes. Cut them into small pieces. (Smaller pieces cook quicker.) Place them in a pot and cover them with water. Bring to a boil and boil until very tender. Drain. Place in a bowl and mash with a potato masher. I also like to use a mixer to make them super creamy. You now have your mashed sweet potatoes. Measure out 1 1/4 cup and set aside.
Cuisine: American, southern
Course: Dessert, Snack
Tried this recipe?Mention @divascancook on Instagram or tag #divascancook.