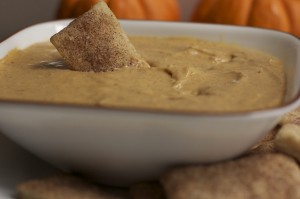 Omg yall I am still on my pumpkin kick! I’ve never been this pumpkin crazy before so I’m not sure why my taste buds are going gah-gah this year. I found some really great pumpkin pie coffee at TJ Max of all places. I use a buttered almond creamer with it and then top if off with cool whip, caramel and pumpkin pie spice. It is almost too good. I think I’ll fix one as soon as I’m done writing this post.  Ok enough about that, let’s get on to this pumpkin pie dip with cinnamon sugar pie crust bites!!!

Seven words for ya my dears. Take. This. To. Your. Next.Fall. Party.  (I totally had to count those words) This pumpkin pie dip just screams autumn and paired with  buttery, flaky homemade pie crust bites, honey hush! It’s like eating a little piece of pumpkin pie. I must admit though, I think I like this dip and pie crust bites better than actual pumpkin pie.

What I love about this pumpkin pie dip is that it’s not too sweet like some of the others I’ve tried. I can keep going back for more (which probably isn’t a good thing if you’ve made this for just yourself). If you’ve ever had a pumpkin cheesecake before this dip taste very similar.  It’s creamy,  silky and full of pumpkin-cinnamon goodness. 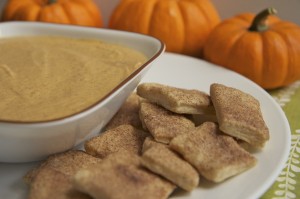 ~TIPS~
When set, dip will be creamy (like a thick pudding)
Roll dough out to 1/8th of an inch thick.
The pumpkin pie dip tastes great the first day and even better then next! Make the day before for parties.
You can also serve this dip with green apples, graham crackers, etc.
Tried this recipe?Mention @divascancook or tag #divascancook!
I’m a Glory Girl!
Blendtec Giveaway