Watch me make this Southern Peach Cobbler From Start To Finish!

This southern peach pie is very similar to THIS old-fashioned peach pie that I posted during the start of this blog! That one continues to be a fan favorite but it was time I refreshed the recipe a bit and gave you guys another way to prepare the filling without using canned peaches.

This peach cobbler filling is much easier! You just dump everything in a bowl. No simmering or making a syrupy sauce. This recipe uses frozen peaches that you cover with sugary mixture and let thaw out. As the peaches thaw it creates a nice syrupy glaze. It does take a few hours for the mixture to thaw at room temperature. Of course you can cheat and pop it into the microwave for a few seconds. I usually start the filling hours before I start preparing dinner so by the time dinner is done I’m shoving this cobbler in the oven!

Is this a peach cobbler or peach pie?

Many people would call this a peach pie since it has a double pie crust but you’ll find that in some parts down south we refer to this as a peach cobbler! You scoop it out with a spoon. It’s a messy, buttery, sinful mess!! Whenever I make a peach pie it’s one that will usually hold it’s shape when cut and filled to the brim with peaches and a tapioca or flour for thickening. I’m making a fresh peach pie this summer so stay tuned for that if that’s what you’re hunting for!

There are  three parts that equate to a really good peach cobbler!! Let’s talk about them shall we? Up first… 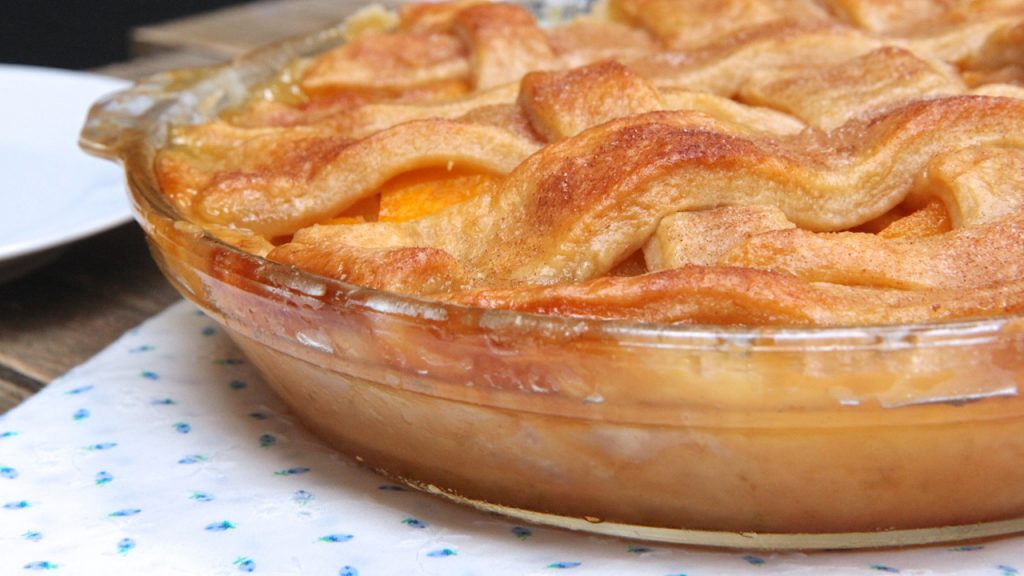 What makes a good peach cobbler?

THE PEACH COBBLER CRUST- Homemade crust is the only way to go here people! This crust y’all!!  Yes it’s the pie crust I use with all of my recipes just about and I fall more and more in love with it each time I make it!! For me, a good peach cobbler must have the bomb crust! This pie crust is crisp on the outside yet soft on the inside and it tastes like a buttery biscuit!! I think that’s why I love it so much, it has flavor!!! And that generous sprinkling of cinnamon sugar on the crust just makes it simply divine!  I could seriously eat it all by itself.

THE PEACHES- I’ve made peach cobbler with canned peaches, frozen peaches, and fresh peaches and they all taste amazing! Normally I’d prefer fresh over anything but I really can’t tell a huge difference over using canned, frozen or fresh in cobbler recipes. For this recipe I used frozen and decided to skip the cinnamon and spices that I put in my other peach cobbler recipe. I wanted the flavor of the pure peaches to shine through and they sure did!! All that peachy aroma just took over my kitchen!!

Last but not least…

THE  PEACH COBBLER SYRUP- You know  what’s one of my favorite things about a peach cobbler? It’s when that peachy syrup combines with the underside of the crust and makes it all gooey! OMG soooo good!!!! There is nothing worst than a watery, soggy peach cobbler. It’s really important that you let the peaches thaw out completely! You don’t want them releases that extra water inside of your cobbler. Also be sure to use a slotted spoon when adding the peach filling to the pie. You preaches will release enough juices of their own so we don’t need the extra syrupy mixture.

Now, go make yourself a homemade southern peach cobbler and eat it with reckless abandon! You deserve it! 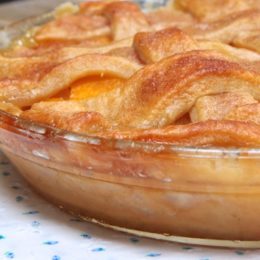 Get the Recipe: Southern Peach Cobbler

The juices from this pie has bubbled over in the oven on me twice. Be sure to put a baking sheet under the pie to prevent this. It's no fun cleaning this sticky stuff out of the oven.
Cuisine: American, southern
Course: Dessert, Pie
Author: Divas Can Cook
Tried this recipe?Mention @divascancook on Instagram or tag #divascancook.
Cakes & Pies Cobblers Desserts/Snacks Southern Classics