Ask anyone in my husband’s family and it’s pumpkin pie by a landslide!

I remember asking my mother when I was little, “Do white people eat sweet potato pie?” Ha! I was so serious. I honestly thought sweet potato pie and pumpkin pie is what separated the white south from the black south. We always had both at Thanksgiving but my other family and friends seem to either have one or the other.

Do you have a preference?

I just recently started liking pumpkin pie after making it for my husband over the years. What I discovered is that it’s actually pretty darn good. Sweet potato pie is still and probably always will be my lover, but pumpkin pie…yeah she has grown on me in my elderly years.

The key to a really great pumpkin pie is to spice it enough so that it doesn’t taste blah because let’s face it, pumpkin isn’t the most flavorful fruit. Also, the loose, wet texture of pumpkin pie can be a huge turn off for some, but that’s an easy fix.

Which milk to use for pumpkin pie? Evaporated milk, heavy cream half n half, whole milk, or my!

This is the million dollar question. Most people use evaporated milk. It’s the traditional way to make it and apparently, Libby’s pumpkin pie recipe is the way it should be made. Although some swear by sweetened condensed milk for an ultra-creamy texture and perfectly sweetened flavor.

Me? I like to use evaporated milk mixed with heavy cream. It creates a texture that’s not too thick and creamy (cheesecake-like) but not as wet as traditional pumpkin pie can be. My second runner-up is sweetened condensed milk. It creates a truly luxurious texture. Just nix some of the sugar in this recipe if you decided to go that route.

Any milk would probably work though, even whole milk or almond milk (def. gonna try almond one day).

Pumpkin takes to spices so well! It really helps to bring out those natural pumpkin flavors. You can’t go wrong with cinnamon, nutmeg, ginger, and clove, but just don’t go too crazy here or you’ll overpower the delicate pumpkin taste and aroma. Chinese five spice works well here too and I like to add a bit of maple to play on all of those spices.

I always let my pumpkin pies set overnight and then come to room temperature the next day before serving. The texture and flavor are much better the next day when all of those spices have had a chance to hang out! I’ve found that with letting it sit overnight in the fridge I don’t have to add any flour or cornstarch to the recipe. It firms up so well.

I hope you guys enjoy this recipe! 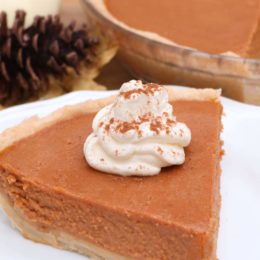