Watch me make this easy banana pudding recipe from start to finish!

My sister was selling these cute lil banana pudding cups last month in her bakery and I ordered 4 of them. I told her it was for my family but really…they were all for me.  There, Shon, I confess!! I’m not proud of it, but I sure do LOVE a good banana pudding!!

Normally my go-to recipe is this one that my grandma Barb made often. Since I’m not of fan of Southern-baked banana pudding, her recipe is heaven on earth!

It consists of vanilla pudding mix, cool whip, milk, sour cream, bananas, and vanilla wafers. This was probably the ONLY time I’ve seen my grandmother use packaged anything but the taste is unbelievable! And the dish gets scraped clean every. single. time.

Grandma Barb’s recipe is similar to Paula Deen’s popular banana pudding recipe (Not Yo Mama’s Banana Pudding), only it uses sour cream instead of sweetened condensed milk and vanilla wafers instead of chessman cookies. I prefer my grandma’s banana pudding hands down though! That sour cream is the ticket!!!

Even though I was content with that banana pudding, I still wanted a from-scratch recipe in my stash that didn’t involve instant pudding mixes.  My issue is that I DESPISE homemade vanilla pudding made with eggs. I’m not quite sure why, but it just doesn’t work for me and my entire family is the same way. Weird I know.

I tweaked this banana pudding recipe I’m about to share with you today and fell in love!!! It’s eggless and so sweet and creamy!

I loved it so much that I threw it right into the cookbook that very same day, per my husband’s and son’s requests!

If you haven’t purchased my cookbook memoir yet head on over and snag your limited copy! It’s chocked full of so many recipes and life stories.

A good banana pudding is a potluck dessert favorite and I’ve made this recipe so many times. It’s always so well-received and this is now my go-to for from-scratch banana pudding.  I’m so excited to share this with you guys!

What I love about this banana pudding recipe

How to make the best Banana Pudding Recipe

Is this a custard pudding? No, this pudding does not have egg whites or egg yolks. It’s similar to instant box pudding mix but with a natural vanilla flavor.

Can I use flour instead of cornstarch to thicken it? Cornstarch works best and doesn’t need to be cooked as flour does.

Will heavy cream work in this recipe? No, in order to create a fluffy Cool Whip-like texture you’ll need to use heavy whipping cream. 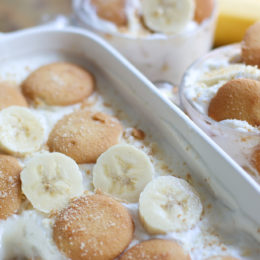 Get the Recipe: Banana Pudding (From-Scratch)

6 comments on “How to Make Banana Pudding (From-Scratch)”