If you follow me on facebook then you know how obsessed I am with Chick-fil-a’s new banana pudding milkshake. Yall…like seriously…I was drinking one of those every single day!

It was like a milkshake full of comfort. It didn’t matter how stressful my day had been I knew that all would be well once I got my banana pudding milkshake fix.

Then all of a sudden SOMEBODY(and I thank you) had to ruin it by sending me the calorie count ….780 calories!!! What in the milkshake hell!!!! I just lost my muffin top and I was not about to get her back….at least not before Thanksgiving.

I knew I had to stop but it was so hard!! It’s not unusual for me to become attached to fast food items. Not to long ago I kicked my McDonalds Real Fruit Smoothie addiction by recreating my own. That was exactly how I was going to handle this addiction! I would try to recreate Chick Fil-A’s banana pudding milkshake!!!!

I played around with some ingredients and made it about 5 times before finally settling  on one that I thought was awesome (dare I say better) and had that same comfort appeal!!

I love this banana pudding milkshake and YES I think I am officially done buying them everyday. Well…not unless I’m out and about when the craving strikes.

I hope that you enjoy this recipe as much as I’ve been!!

Watch me make this banana pudding milkshake from start to finish!! 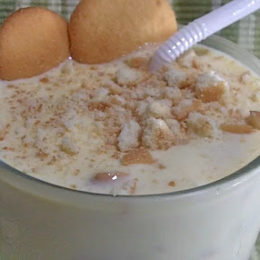 Get the Recipe: Banana Pudding Milkshake...Say What Chick-Fil-A?

*Note* You can add in more pudding if you prefer a sweeter, stronger banana taste. If you do that you will also need to increase the soymilk and ice cream as well. Otherwise, you run the risk of just have pudding. (Made that mistake a lot during my recipe testing)
Author: Divas Can Cook
Tried this recipe?Mention @divascancook on Instagram or tag #divascancook.
Beverages Desserts/Snacks